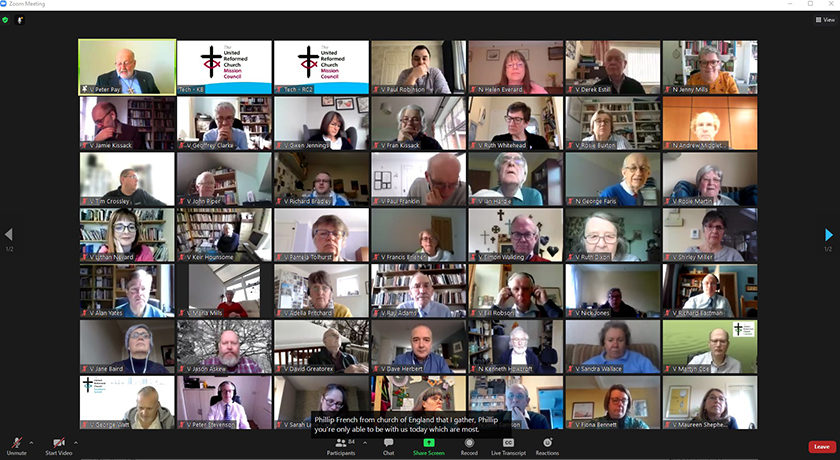 The spring meeting of Mission Council, the executive body of United Reformed Church (URC) General Assembly, opened on 15 March. Due to the Covid-19 restrictions, the meeting was held digitally.

Opening worship
After a welcome from Peter Pay, one of the Moderators of the URC General Assembly, Mission Council began with worship.

“God says come in,” were the opening words from the Revd Helen Everard, Chaplain to the Moderators. Heroes and villains, the theme for URC children’s and youth work for 2021, is the theme for worship.

The Revd Peter Stevenson, Convener of the URC Communications Committee, read from Genesis 18, about Abraham at Mamre.

A Bible study followed from the Revd Dr Janet Hopewell, Associate Minister at St Ninians, Pagham, and Chaplain and Advocate to the Elderly for the URC’s Southern Synod.

As a child, Janet received and read a book about Greek mythology from her uncle John. More recently, she read Mythos, a retelling of those myths by Stephen Fry. Isn’t it funny, Janet asked, how history can repeat itself?

Janet shared the story of Philemon and Baucis, an old married couple who received the gods Zeus and Hermes, disguised as travellers, after they had been turned away by neighbours. To thank them for their hospitality, Zeus granted them a wish.

The couple wanted to die together and when their wish was granted, they were turned into entwined trees for all of eternity.

Abraham was 99 years old, sitting the shelter of his tent when he sees visitors approaching and offers them a sumptuous meal. His first duty is to care for them. He is then honoured by a serving God. But how did he cope with fatherhood as a centenarian?

At a conference on faith in older life, one of the speakers said that the measure of how we react to older people is the measure of our humanity. For example, if a baby is sick on you, it’s a badge of honour. Not so if it’s an older person.

“I believe in the quiet courage of ordinary men and women leading everyday lives. Abraham gets on with it and so should we. When our church buildings are open again, let’s take a fresh look at our aged congregations with all their limitations and accumulations of experience.”

Following the Prayer of Dedication and The Lord’s Prayer, the Petersfield and Liss URC Band sang Blessed be your name by Matt Redman.

Mission Council then approved the minutes of November’s meeting. 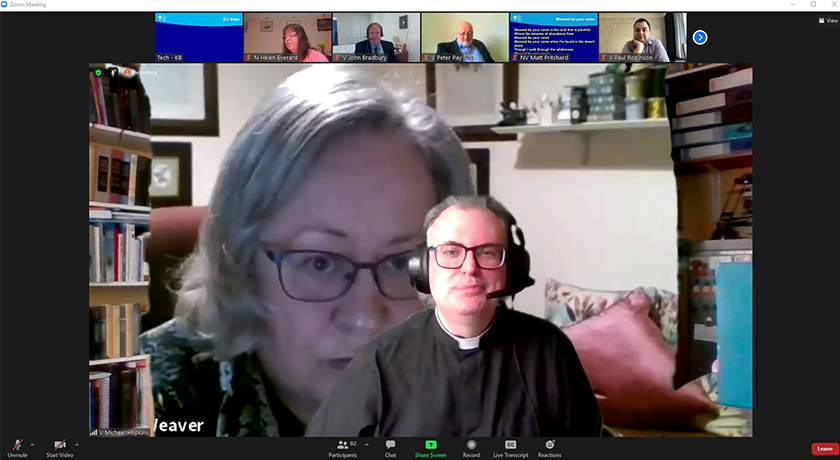 Before the business of session one began and in good fun, the Revd Michael Hopkins warned Mission Council that he had brought ‘back-up’ with him before apologising to Mission Council for a delay in advising the Communications Committee that Paper C3 had been removed altogether from the agenda for further consultation. His back-up was a virtual background image of Jackie Weaver, Meeting Clerk for the Cheshire Association of Local Councils who became an internet sensation after dealing with argumentative councillors on a Zoom call.

C1:  Communications Committee update
A report on the work of the committee and team, including pandemic guides and Lent and Advent kits.

(Revised guidelines for using social media in Paper C3, will be debated at General Assembly.)

D1:  Education and Learning Committee update
A report on the work of the committee and team, including the redesign of Education for Ministry phases two and three.

D2:  Education and Learning Committee sizing
Mission Council accepts the proposal to reduce the size of the committee from 25 to 18 and to update the terms of reference for all its roles.

D4: Integration consultation update
A report on the continuing denomination-wide consultation on developing a more integrated education and learning system. A significant number of responses have been received and there is an appetite for change.

F1: Faith and Order update
A report on the work of the committee, including the publication of a series of ten booklets under the heading: ‘What do we believe about …?’

G1: Pensions update
A report on continuing conversations across the URC concerning the challenges that face the Church with regard to its pension schemes. Funds have been affected by low interest rates and the guidance from the pensions regulator has become more onerous – changes which are proving costly at a an uncertain time for Church finances, as a result of the Covid-19 pandemic.

(Future pensions will be debated at Mission Council, in resolution G3.)

Paper H1: Capability Policy
Following consultation, a change has been made to the wording of the URC’s ministerial capability process, which was provisionally agreed by Mission Council in November 2020.

(‘Marks of Ministry’, a description of what the Church can expect of those called to be worship leaders or lay preachers, will be debated by Mission Council under resolution D/H1.)

Paper I1:  Mission Committee update
A report on the work of the committee and team, including Legacies of Slavery, becoming an anti-racist church, and the Beirut emergency appeal. 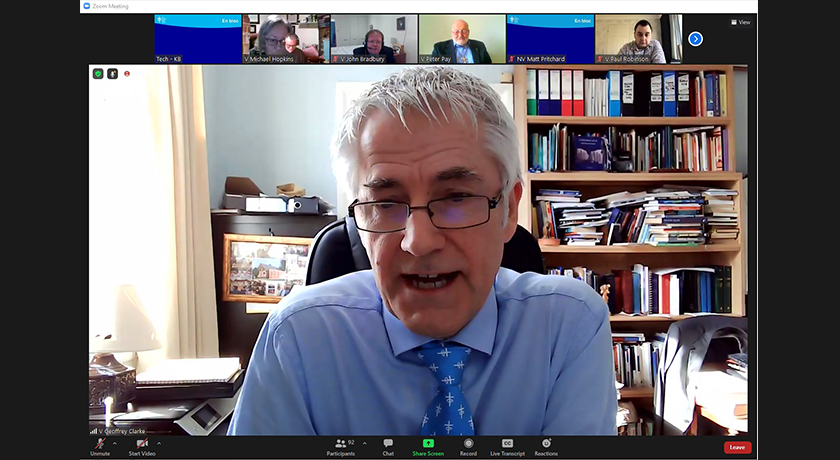 Thanks expressed
The Revd Geoffrey Clarke, Moderator of the East Midlands Synod, shared with Mission council how after a recent synod meetings, representatives felt that Paper C1: Communications Committee Update, was worthy of acclaim. He said: “Together we felt a sense of pride and appreciation for the scale and quality of work produced by the Communications Team. We are grateful and want to say well done Communications, much pride and thanks.” This was echoed by Mr Pay.

Paper A1
The Revd Dr John Bradbury presented Paper A1: Toward the future of the URC on behalf of the Business Committee.

John advised Mission Council that due to extraordinary pace of secularisation, the URC had reached a time where it needed to reflect on its direction.

“When we stop and take seriously the world and our place in it, we see that things are radically different to 50 years ago when the final preparations were being made to bring the United Reformed Church into being,” He said. “Our calling is to take that reality seriously. Our calling is to ask ourselves what, out of the place we find ourselves in the world, God would have us discern? What are we called to understand in new and different ways? What are we called to repent of – to turn around from, and begin again renewed in the power of the Spirit?”

As part of the Reformed tradition, John added that the URC has never believed in one permanent form or structure and that in  new moments, the denomination needed to return to scripture to ascertain what God is saying to us here and now.”

As the URC approaches its 50th anniversary, John added that the faithful thing for the URC to do is to pay attention to the place that God has brought it, and for the Church to ask itself some difficult questions: “Is the house that we are living in, with its structures and forms, the way its resources are stewarded, the legal entities that sit behind it – are they really the right shape and size such that in 20 years’ time the United Reformed Church will be able to concentrate on its vocation to worship, evangelism, witness and service? Or are we in danger of living within a structure that eats all our time and energy just to keep going, until the moment we find we’re just not going?”

John made clear that he was not asking Mission Council to make a decision on these questions, but instead for it to appoint a small group of six which will oversee a process of reflection and change. Groups were asked to reflect on the gifts and grace that the group would need if the church were to have confidence in them. He said that many others would need to be drawn into the work in time, and General Assembly would be asked to determine the scope and approach the work took when it met in July. John added that he hoped that this would result in a review of the structures, resources, and work of the Church that would respond faithfully to the challenges present in Paper A1.

Mission Council then broke up onto groups to think on what kinds of gifts and graces would be required in any such group, and if the Church was indeed being called to set of such a path. 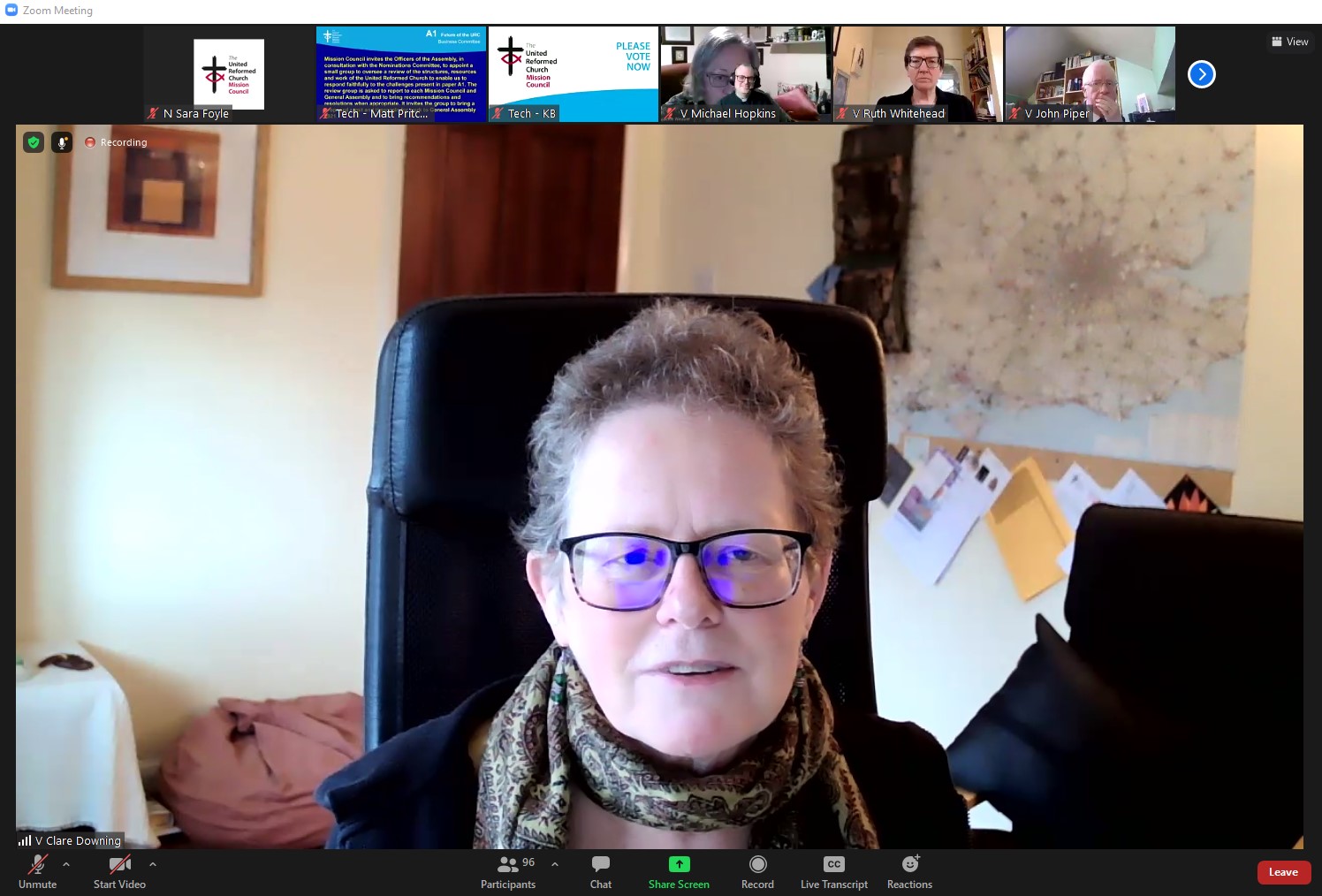 Questions taken from the floor included: what the costs of such a group and review might be, if the size of the group was sufficient, how would the right people be involved, is there a need for two groups: one to steer the process and one to oversee the whole process including the steer, how would every voice of the Church be heard, how would the gifts and graces needed would be ascertained?

Comments were also made about the URC’s track record on small group work which was said to not be as successful as the Church would have hoped. John agreed with this point but added: “This is not a reason for not moving forward.” He added that it was important for all councils of the Church to be heard hence why the mind of Mission Council was being asked to be tested now.

An amendment to the resolution was proposed in regard to removing the limit of the amount of people in the group.

The resolution then read: “Mission Council invites the Officers of the Assembly, in consultation with the Nominations Committee, to appoint a small group to oversee a review of the structures, resources and work of the United Reformed Church to enable us to respond faithfully to the challenges present in paper A1. The review group is asked to report to each Mission Council and General Assembly and to bring recommendations and resolutions when appropriate. It invites the group to bring a proposed remit and timescale for work to General Assembly 2021.”

The amended resolution was passed. 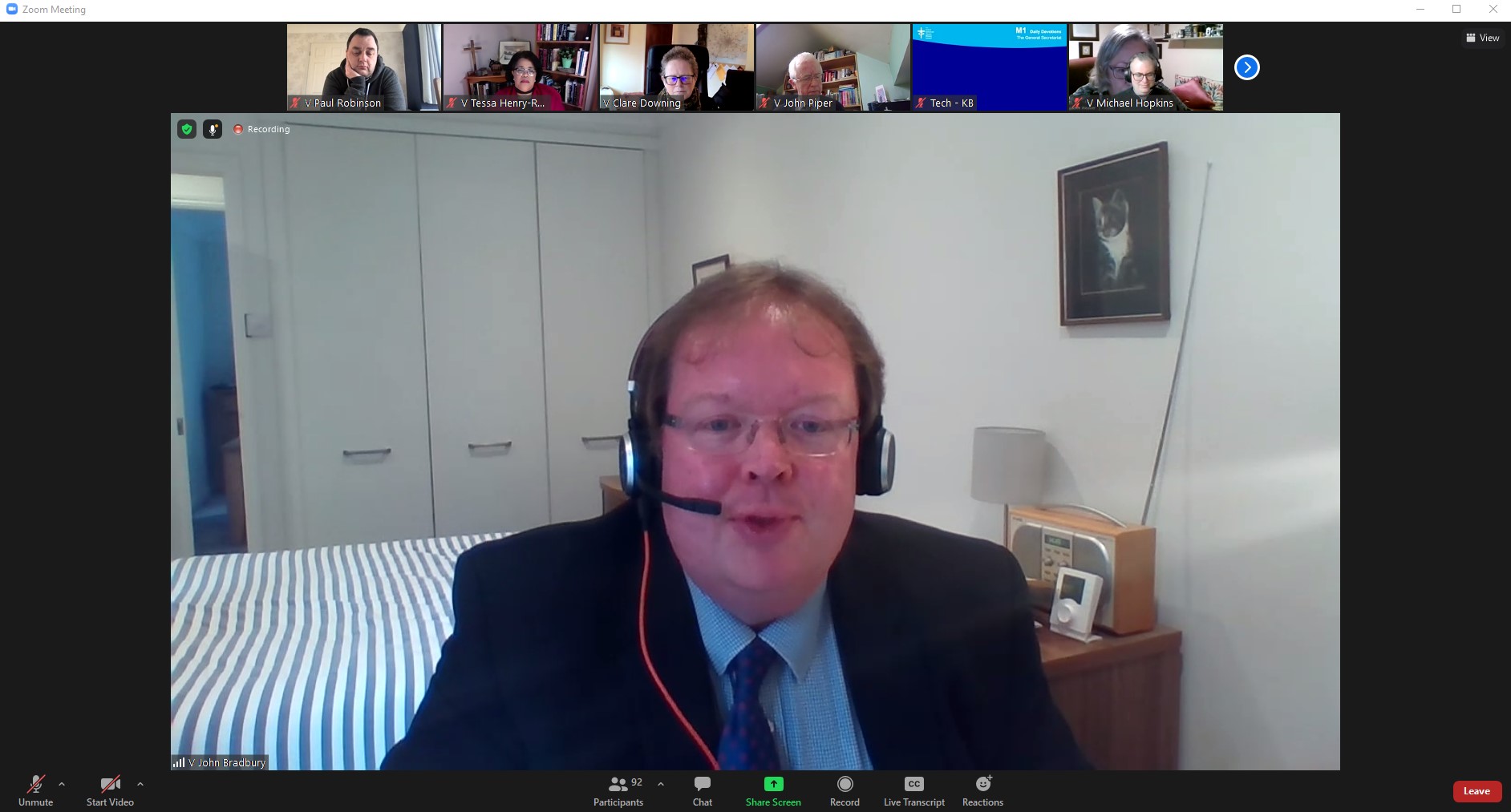 Daily Devotions, the URC’s popular digital resource, which was started as a personal initiative by the Revd Andy Braunston, has grown to the point where is received by 4,000 people each day. At the start of lockdown, the work was extended to include an online Sunday service, which 1,500 people take advantage of. Mr Bradbury thanked Mr Braunston for the great deal of work it took to create and edit this resource that has been of such benefit to the Church.

The resolution proposes a consultation on making Daily Devotions a more integral part of the work of the Church and developing it further, bringing proposals to this year’s General Assembly.

Members of Assembly voiced warm enthusiasm for the proposal, and thanked Mr Braunston and his team for Daily Devotions. One suggestion was that the proposal would be an opportunity to make the Sunday service more reflective of the diversity in styles of worship throughout the URC. Mr Bradbury agreed and said that, as a more official denominational initiative, it would also need to be intergenerational. 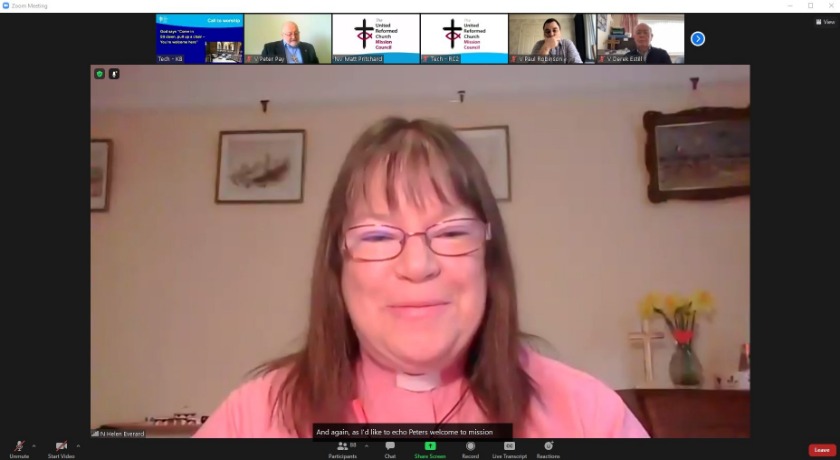 Closing prayers, were led by the Revd Helen Everard. Before beginning, Helen expressed gratitude to the URC’s Children’s and Youth Work team, who with Helen Boxer, produced resources and images for the closing prayers based on URC Youth Assembly’s theme for 2021 ‘Heroes and Villains’.

This entry was posted in URC News. Bookmark the permalink.